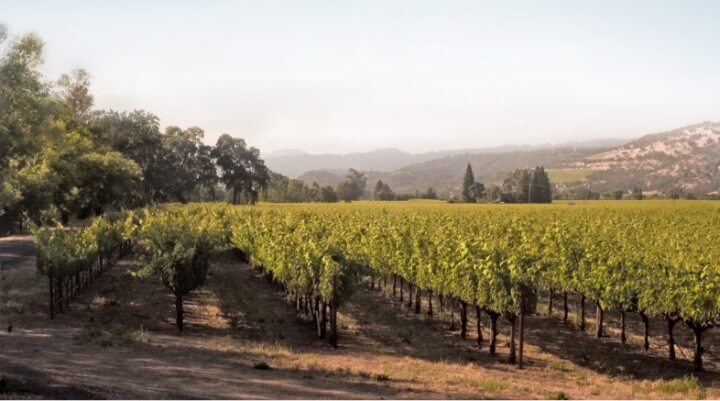 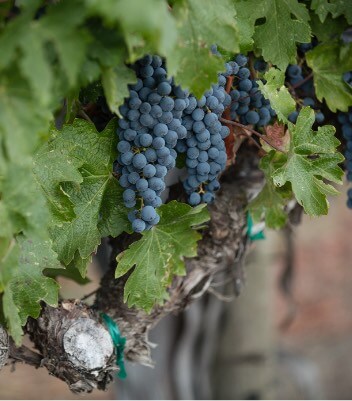 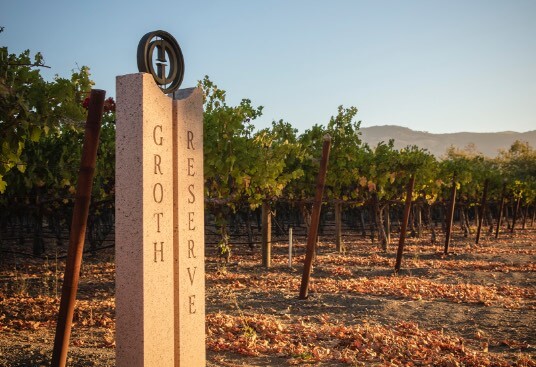 We are dedicated stewards of the land, understanding that the quality of our wines is inextricably linked to the well-being of our vineyards.

We believe that the magic in the bottle comes from what happens in the vineyards. Farming this land for more than four decades, we know each block intimately and cultivate each vine responsively. Our vineyard and winemaking teams are fully integrated, working side by side throughout the seasons to produce outstanding wines of place, vintage after vintage. As caretakers of the sites we call home, we farm our land sustainably, taking into consideration the impact we have on the environment, the communities surrounding us, and the health of the entire Napa Valley watershed. 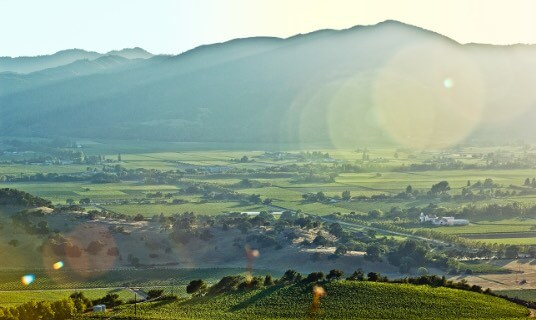 The Groth Oakville Estate is nestled in the heart of Oakville, a breathtakingly beautiful place stretching between the majestic mountain bookends of the Mayacamas to the west and the Vaca range to the east. With hope and intuition, sharing a vision with their esteemed neighbors, the Groth family helped establish the Oakville AVA which has become recognized as one of the world’s preeminent wine regions.

The Groth Reserve Vineyard, 27 narrow acres running along the eastside of Conn Creek, are planted exclusively to Cabernet Sauvignon. The blocks are an anomaly within the greater 165 acres that comprise the estate — and indeed within the Oakville AVA itself. Its gravelly, sandy loam soils feature an abundance of red chert, a hard sedimentary rock containing small quartz crystals and fossils deposited by an alluvial fan flowing from the Vaca mountains millions of years ago. This ancient soil represents the heart and soul of the “sweet spot” we call our Reserve Cabernet Vineyard.

South of Yountville, tucked alongside the foothills of the Mayacamas in the Oak Knoll District, our Hillview Estate benefits from the cooling breezes of the San Pablo Bay. We purchased the 44-acre site in 1982 in search of an excellent Merlot source to blend with our Cabernets. Napa Valley’s sub-appellations did not yet exist back then, so we had no concern about whether the property fell within Oakville limits; we simply sought out the best Merlot vineyard we could find.

In 1996, our second winemaker, Michael Weis, saw that the site’s micro-climate and diverse soil types were ideal for growing world-class Chardonnay, so we strategically replanted 26 acres to the variety, reserving approximately 12 acres of our finest Merlot vines.

The small Hillview House on the property served as our winery offices prior to the completion of our Oakville winery in 1990. And now, with the second and third generations of the Groth family living on this site, three generations call our two estate vineyards home. 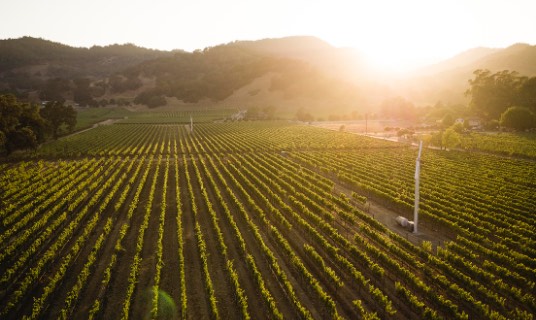 In 2018, we initiated an extensive replanting effort — to take place over 30 years across both of our estates — to ensure every one of our vines is optimal for our family’s next generation.

Cabernet Sauvignon has always been and will always be our passion and primary focus, and we have planted it in such a way to produce the most authentic and expressive wine possible. As we grew to know our Oakville site, we realized that its four eastern-most blocks were perfect for growing world-class Sauvignon Blanc and Semillon. We also recently planted a small amount of Petit Verdot, Merlot and Cabernet Franc. Our Hillview Estate in Oak Knoll — planted to 37 acres of vines — has proven ideal for growing Chardonnay and Merlot. We may experiment with other varieties on our estates as the vineyards dictate.

Each of our varieties is carefully planted to align with its ideal soil type, rootstock, clone, and trellising. From 1999 to 2003, under the leadership of Winemaker Michael Weis, all 54 acres of our Oakville Estate Cabernet Sauvignon were strategically replanted with new clones and rootstock. Preserving the distinct provenance of our estimable Reserve Cabernet, we halted its production during this time, reintroducing the wine in 2005 once our newly planted vines had come of age. 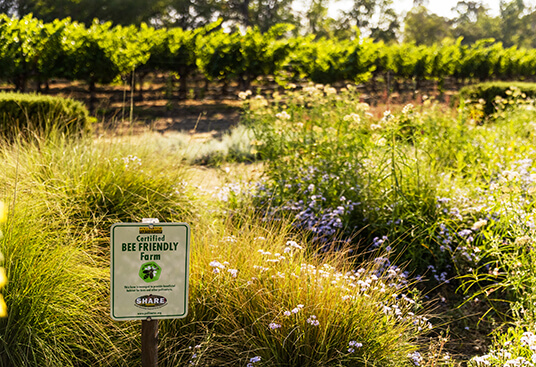 “We know the job of taking care of our greatest assets, our vineyards, is never done. … We started the comprehensive replant project in 2018. It will take us 30+ years to finish. The next Groth generation will have to complete this task.” — Dennis Groth

Farming the land sustainably is not only optimal for the grapes; it is the right way to do things. We employ sustainable wine growing and farming, taking into consideration the impact we have on the environment surrounding us and the health of the entire Napa Valley watershed.

More often than not, the practices that promote grape and wine quality also have an environmental payoff. For example, when replanting vineyards, we changed the row orientation from east-west to north-south to allow breezes from the San Pablo Bay to flow more easily through the vineyards, increasing air circulation and reducing the need for fungicides. Our cover crops augment organic matter in the soil, giving it a higher water-holding capacity so we don’t need to irrigate as frequently. Our specialized farm equipment allows us to control weeds without using herbicides, and installing owl boxes, raptor perches, and blue bird boxes on our property has helped naturally control gophers and insects. We have also planted an insectary garden, creating a welcoming environment for beneficial insects that support the health of our vines. 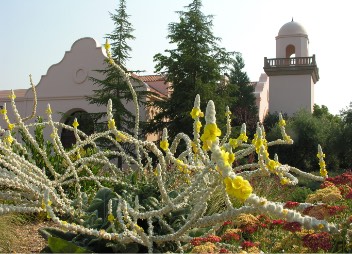 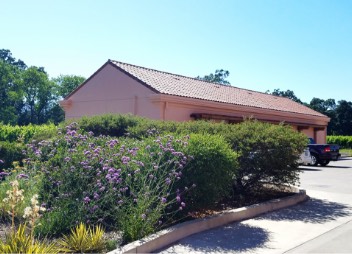 Over the past 40 years, we’ve developed an intimate knowledge of our vineyards and the wines they are capable of producing. Our farming and winemaking efforts are fully integrated; one dedicated team manages every careful step, from growing the fruit to putting the finished wine in the bottle.

“There’s a genuine commitment here, an undeniable focus, a shared dedication to making sure every step of what we do contributes to the highest quality wine.” — Ted Henry

As Groth’s Director of Winegrowing, Ted Henry oversees every step of the wine-production process, from growing the grapes to bottling the wines.

Ted joined Groth in 2021, following five years at Clos du Val, where he had most recently served as Director of Winemaking. Prior to that he was Winemaker at Jarvis Estate.

A fourth-generation San Francisco Bay Area native, Ted grew up on his family’s ranch, where he was immersed in agriculture from a young age. He earned his degree in fermentation science at the University of California, Davis.

Ted lives in Napa with his wife and two daughters. He enjoys the outdoors and visits Lake Tahoe whenever he can. 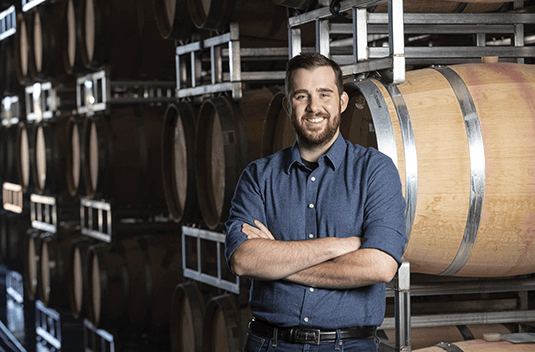 As a Viticulture and Enology student at Cornell University, Collin Dillingham’s first exposure to wine grapes was working the Riesling vineyards of Cornell Orchards on the shore of upstate New York’s Cayuga Lake.

After earning his degree, Collin completed harvests in Santa Maria, Edna Valley, the Finger Lakes and Napa Valley, joining Groth in 2020 to work in the lab and cellar. As Enologist at Groth, Collin’s responsibilities include overseeing quality control and running all analysis on wines from harvest through bottling.

With a love for horticulture, Collin enjoys working outside in his garden, and also spends leisure time baking and experimenting in the kitchen.

In 2002, José joined the team at Groth and was promoted to Cellar Master in 2005. Managing the cellar crew, harvest interns, bottling line and production cellar keeps him busy.

Outside the winery, “Family comes first,” says José, “then food and sports.” He loves to cook and is inspired by his Executive Chef brother. Every weekend, except during harvest, you will find José scrimmaging with the local soccer scene.

Ben and his vineyard team are playing a major role in the long-term project of systematically replanting the Groth Estates, 4-6 acres each year.

Ben is a true farmer, and he enjoys spending time in his garden. He has a personal goal of growing all his own food. 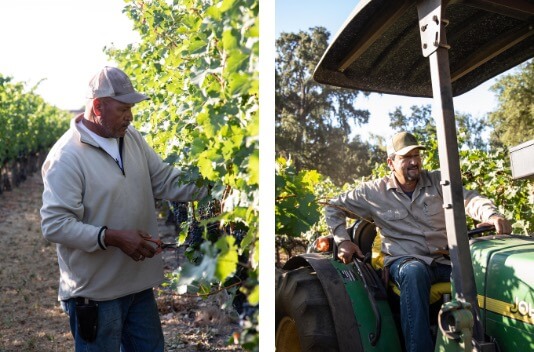 Vineyard Foreman Miguel Avina and Vineyard Supervisor Gerardo Ayala started work at Groth within one day of each other in 1990.

They are among the longest-tenured employees at Groth. Their dedication, knowledge and experience farming the Groth Estates is invaluable. In 2019, they completed the first phase of a 30-year sustainable replant program.

Back To Top
×
Manage Cookie Consent
To provide the best experiences, we use technologies like cookies to store and/or access device information. Consenting to these technologies will allow us to process data such as browsing behavior or unique IDs on this site. Not consenting or withdrawing consent, may affect certain features and functions.
Manage options Manage services Manage vendors Read more about these purposes
View preferences
{title} {title} {title}